Yesterday was a big crafts, movies, and food with family day, so I didn't think I'd end up playing much at all. After I finished a few rounds of crafts and some idle doodling, though, I turned on Disaster Report 4: Summer Memories and got way too into it for longer than I intended. I got to the next area, did a line of "quests" in a convenience store, and took the time to pester one of my friends about how much I was enjoying it. My impression of it so far is that it's like an RPG would be if it were all NPCs, no battles, which is interesting. I also like how tiny and inconsequential some of the choices you can make are, like deciding how far your character travelled to the city as they think to themselves. I'm glad that my vague desire to play a game where you explore a place led to my picking this up off of my shelf the other night. 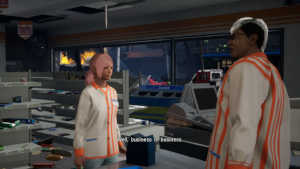 I'm not 100% sure what I'll do today. I have nothing going on and no cooking needs to worry about, but did get a new, obviously bootlegged craft kit in the mail I'd like to crack into. Video games will be involved, at least for a few minutes, but it's totally up to me how far I take that! It's nice.

Today isn't as bad as the last couple days have been. I've already been out and run some errands this morning, and since I don't have work to worry about today, I'm a little less tense.

Last night, I decided to get back on track to finish Kandagawa Jet Girls, clearing the peppy American dorks' story and moving on to the shrine maiden team's story mode, which actually offers somewhat of a challenge! The AI doesn't seem to be any better, though. Their jet ski just has miserable garbage acceleration states, leading me to think the challenge might fade as I can install better parts on their vehicle. I'm in this game to clear it, though, so I'll take points of interest where I can find them. 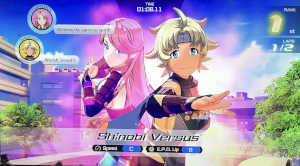 I also went back to Disaster Report 4: Summer Memories and, after starting over to make a very small change to my player character, wandered around for about an hour. So far, this is a very interesting mix of laid back exploring and sound design that evokes the idea that every building around you is damaged to the point that it will creak into submission. I'm enjoying it so far and interested to see where it goes next. 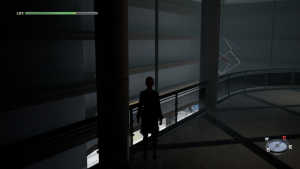 Today's post is going to be pretty bad, too. I wanted to play a game where I could wander around a place- specific, I know- so I started Disaster Report 4: Summer Memories on Switch. I was pretty tired, though, so I only played for 15 or 20 minutes. I'm kind of excited to play again tonight, though, and see what happens next. 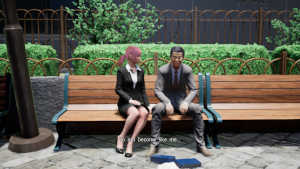 It's the start of a new month today! For November, I didn't have many cleared games- just Sonic the Hedgehog and Serre, which is fine. I don't have many solid goals for December, but I'd like to see if I can clear Kandagawa Jet Girls this month.

Yesterday was pretty good, but even though I spent most of the day just in a car, I was pretty tired by the end of it. I'm not really enjoying Sonic Frontiers at all, so I ended up just doing the daily missions Mahjong Story 2 spit out at me and going to sleep. 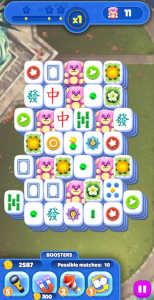 This is not a week for detailed posts, but that is okay. I am going on a small road trip today, albeit not for fluff reasons, and I want to get a post done beforehand.

I played Sonic Frontiers again last night, and even though most of the game is interesting, the camera is so awful I legitimately can't beat the boss I'm working on. I can climb up to the top of it, but then the camera switches to an angle where I can't see Sonic, leaving him to get hit by an energy ball and die while I adjust the camera upwards. I tried just making him go serpentine while I adjust the camera upward again, but then he just falls off of the top of the boss monster, leaving me to repeat the whole process. Earlier in the boss fight, I have some camera clipping issues, too, going straight through the boss's arm when I fall off, but those at least don't lead to a game over. I am stumped as to how to deal with this and win.

The screenshot is not of the boss, because I am too busy making terrible noises and swearing as I try to fight it to take screenshots. 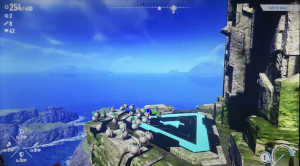 Today is another quick post, since I have to drive in and cough on people in the office today, rather than just coughing at my desk Alexa. I wanted to go to bed at an okay hour last night, so I played Sonic Frontiers for another half hour or so. I got kind of stuck on one of the giant bosses because I kept falling and clipping through the arm I was supposed to run up, but cleared a couple of the tiny challenges. I'll try to fight the boss again tonight or tomorrow. I'm making a super fast post before work today, with my fingers crossed for a decent start to the week.

I started Sonic Frontiers last night. When it came out, I decided to wait until it was 30 or so dollars to pick it up, not expecting that would happen within the month. I'm not sure what I think about it yet, though, since I only played for an hour or so. 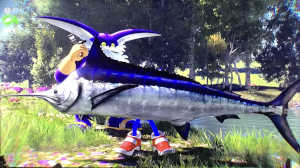 While the game and updates installed on Sonic Frontiers, I played PriPara: All Idol Perfect Stage for a few minutes, too. It's convenient to just have this in my Switch right now.